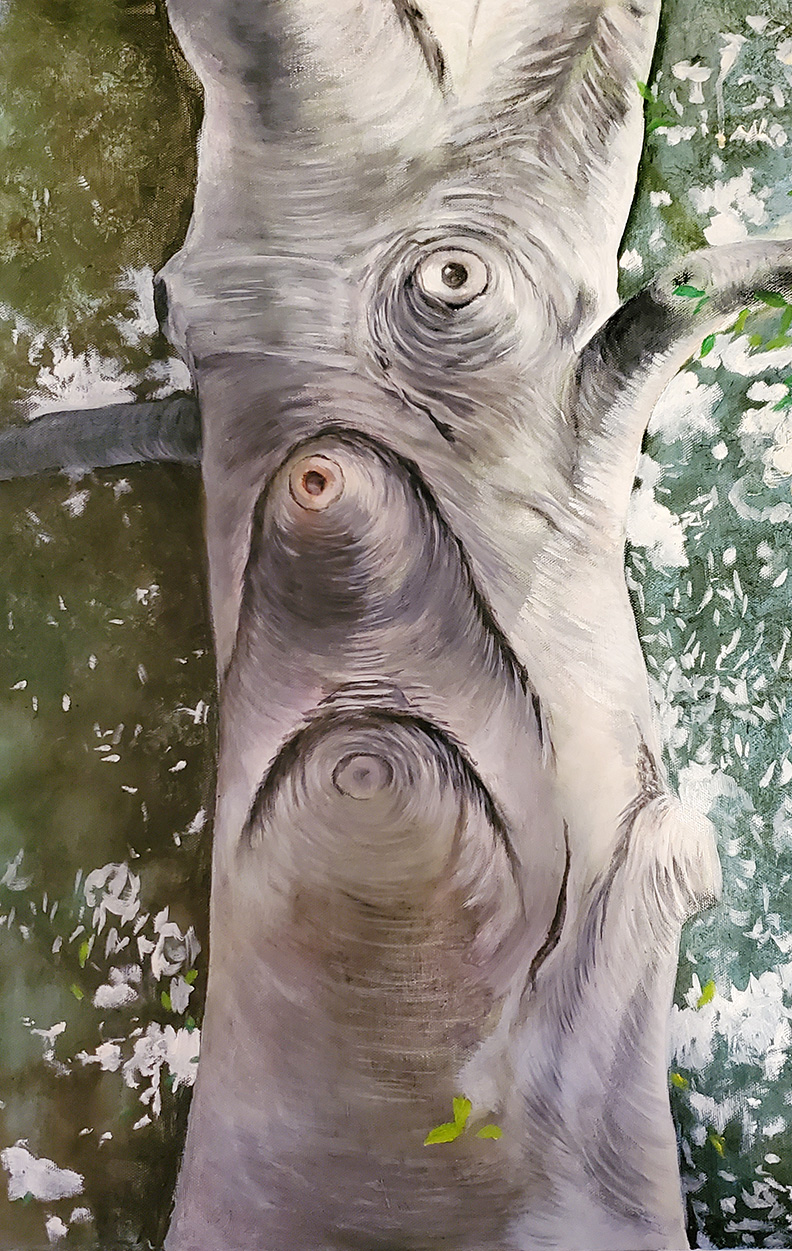 That Tantalizing Tree of Lives

Question: If you were tied to a tree, how would you get yourself free?…This question may sound silly and of little consequence, but it is of great importance to the work I am about to publish. The culmination of years of study and research is my PhD thesis, titled, “The Entropy of Democracy in Western Society.”

The riddle of being tied to a tree provides the setting and theme and initiates the pace of my thesis. It is the metaphorical glue that holds my central-argument together. And, for this cohesion, and for many enlightening ideas that influenced my thesis, I am indebted to the American author Elizabeth Garden, and to her book: Tree of Lives.

I came to America from Nafplio (Peloponnese), Greece to study sociology and American literature. My post-graduate work focuses on the ethnological differences that contribute to either the reinforcement — or the dissolution — of democracy in the West.  Books by contemporary authors are vital tools in my research, and I voraciously read to compare American ideologies (my test-group) with those of Europe (my control-group).

Garden’s book was an enlightening discovery.  It gave me a new perspective on many of the challenging ideas I was working with.  On the surface, Tree of Lives is about childhood scars and family dysfunction.  Its ‘polyptycho’ (πολύπτυχο), or multi-leveled, narrative-form illustrates several generations in the family-life of an American woman who was physically, emotionally, and sexually abused as a child and adolescent; and this woman’s efforts to make sense of the world in the aftermath of this abuse.  Through vignettes of daily-life in a comfortably-affluent 20th Century America, the protagonist (Ruth) comes to terms with the toxic familial experiences of her past, so that she can construct her adult identity.

By studying the “growth-patterns” of her family-tree, Ruth works to decipher the mysteries of her life, and answer the questions essential to her existence: Who is she is? Where did she come from? And, where she is going? These three questions, (though often disguised) are what is being asked when humans participate in sacred ceremonies throughout human civilizations.  Ceremony may take the form of a drum ritual led by tribal chieftains, where participants believe the drums will chase away evil spirits; or, in a case identifiable by Western experience, ceremony may take the form of a mother accusing her husband before courts and doctors of abuse towards her child. This Western example might not sound as sacred to us as the drums, because we are ‘within the culture’; but this mother is doing exactly what the drummers are trying to do: Chase away evil spirits. She is asking sacred questions of life: What are my values, my position in society, and what are my circumstances? And where is this taking me and what can I do about it?

There is a very emotionally moving paragraph where Garden writes:

“Throwing people off cliffs was the tragic family ethos and Ruth chose not to do that. Instead, she jumped.”

…Garden may just as easily be a Greek tragedian writing this passage.  So much of the Greek canon (Oedipus, Tantalus and the House of Atreus, etc.) is devoted to an individual’s conflict of a “tragic family ethos.”

Garden is a very fine writer, and her ability to sustain a polytemporal narrative with numerous principal characters is worthy of admiration.  But it is Tree of Lives’ ethnological importance to my own work that has inspired me to write this review.

What intrigued first and foremost is Garden’s perspective on causality and moral justice.  It is remarkable to read an American author who explores the concept of “hereditary curse” as Garden does. American Individualism, which permeates every aspect of this society, is ingrained in the American mind to a degree that is striking for a European like myself to observe.

We have a common saying in Greece: “Αμαρτίαι γονέων παιδεύουσι τέκνα” (Amartiae goneon pedevousi tekna) This can be translated to read: “The parent’s sin is the children’s strife.” The closest equivalent in American locution would be: “The apple doesn’t fall far from the tree”; but it is rarely used and doesn’t imply what the Greek proverb specifically names; as the notion that “we are our parent’s children” is contrary to American values. Similarly, the proverb, “Like father, like son,” is only used by Americans in light-hearted banter, and would be inappropriate to justify, or explain, any consequentiality involving moral issues.  When ancestors are not admirable, Europeans will “atone,” whereas Americans will disown.”

Garden’s Tree of Lives can be read as a book about ‘atonement’ — a book about “reconciliation.” Through this interpretation, it makes for a book even more impressive, more unique, and worthier of discussion.  Garden does not have the typically American reactionary instinct to disown her unsavory past.  She intuitively knows that a parent’s sin is the child’s strife, unless, the child atones for that sin.  Yet, as Garden also shows, atonement is not a means of ‘saving’ the sinful parent; it is an act to save one’s self through a reconciliation with that greater entity that is, ‘Life.’

“What a shame you bring to this family. A curse on you and your seven generations!”

Tantalus is the classic example of the ‘hereditary curse’ in Western thought.  The word tantalize in English comes from this mythological figure.

Tantalus is a classic example of the ‘hereditary curse’ concept that pervades Ancient thought and still maintains a strong influence today over the direct-descendants of these Ancient societies still living in the Mediterranean world. Tantalus was guilty of crimes against the gods, so his ancestors, e.g., Orestes, Iphigenia and Agamemnon, were guilty due to ‘tainted blood.’ The modern Greek outlook on the ‘hereditary curse’ thrives despite modernity’s lack of belief in the pantheon of gods, and in spite of our scientific way of life that would discount anything suggesting ‘tainted blood’ as pure nonsense.  It thrives because it is ingrained in our psychic foundation that we must atone for sins of our parents; it is instinctual, appearing to be as natural as other instincts, such as the natural drive of adolescent children to rebel against parents and authority.

This ‘instinct’ is astonishingly absent in my test group for my PhD thesis: The American people of the 21st Century. And this lack of instinctual tendencies among the Americans to (a) recognize the sins of the parents, grandparents, etc.; and, (b) atone for those sins through community philanthropy, and/or, conducting themselves in a manner morally superior to that of their ancestors — as a sort of ‘lifelong-apology’ to the Universe for being of blood that was destructive to it — this, my thesis argues, is the reason why the United States represents about 4.4 percent of the world’s population, but houses around 22 percent of the world’s prisoners; and why America has more addicts than any other country on Earth except for Russia, which excels America by only one-half of one-percent.

The American Life — my thesis argues — follows this plan: (a) Enter the world innocent, (b) either suffer child abuse in some form, either at home or at school; or else luck-out and escape it; (c) for those who do suffer abuse, to take the burden on alone rather than blaming a hereditary curse — which makes the abused self-hating, self-destructive, and by this, turn to addiction and repeating the abuse cycle; lastly, (d) through this cycle that destroys lives generation after generation, the ‘hereditary curse ceases to be a mere concept, and becomes an actual phenomenon and self-fulfilling prophecy, where the irony is shown that it is the American people’s deficit of the ‘hereditary curse’ instinct (it could be looked at as a missing gene, although this gene has yet to be discovered)… it is this deficit of this instinct and the American denial that hereditary curses could even exist, that is the *greatest factor in producing the curse to begin with!*  This cultural defect, I argue, is leading the entire world into a very bleak and dystopian future.

Elizabeth Garden’s Tree of Lives is an exceptional book, unique and important because of its original perspective on both, channeling blame for childhood trauma; and the ways that we can become health, and identify what ‘healthy’ means. Garden is applying the psychology that governed the lives of thinkers such as Aristotle, Plato, and Socrates, to her out American value system — a culture that is self-destructive; and — because of its influence over the rest of the world –a dangerous entity in the Universe.

Garden’s book, as you can see, solidified the foundation of my thesis; and I am grateful for this novel. I hope that Tree of Lives will get the impact it deserves so that we as a planet can begin to finally heal from the deep and tormenting wounds that were inflicted long before we were even born.