04 Aug The Sound of Wings 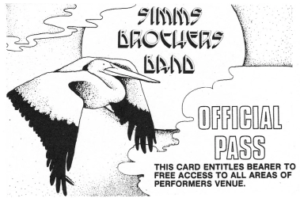 The guys in the band continued to drive school buses mornings and afternoons and rehearse in their basement in-between. At night they gigged in local bars and were attracting a big local following. Ruth managed to always be ever present, partly to be part of the scene, partly to check up on her possibly philandering husband. Besides operating the light show, she helped carry equipment and always,
always danced.

It was such a different life than most of her peers, who would have still been in college working on their degrees. A rock and roll life meant many long hours of work, but at least they were free to be a hippie in a legitimate way, not “selling out” like so many people around them seemed to do. That was always so important. It was a romantic lifestyle in a modern day sort of way. They really thought they
had principles. Choosing to live a healthy artistic counter- cultural way. Lao Tsu’s “Way of Life” was practically their bible. She and Rick studied martial art seriously and reveled in the depth and breadth of it all. Ruth painted and drew and lived a lot more like an artist than she did later on as a professional artist. For a while they didn’t have a car and just rode bicycles to and from the bus company. It was
a time of no responsibility other than balancing her checkbook, although that was something she never could quite accomplish. She would get up with the sun and practice Tai Chi and Pa Kua in the dewy grass, pinch off a Comfrey leaf and eat it with sunflower seeds. Her wardrobe was jeans, t-shirts and sneakers.

The Sound of Wings

Much of what transpires in Tree of Lives is an accounting of actual events in my life, though many identities are changed in order to prevent embarrassment, or worse. Recently I had the opportunity to revisit a slice of my past at the memorial service for the man the character Rick in the story (Ruth’s first husband) is based upon. He passed away at only 69 years old from lymphoma recently and a memorial concert in his honor was held in my old home town. Though he wasn’t a very good husband to me, Rick was a great musician and a respected mentor to many aspiring players, and he was duly honored as such. I made the long journey to pay my respects and show my husband the flavor of my old scene.

In the book, Ruth moved to another state after learning Rick had fathered a child during their marriage, abruptly leaving behind all that she had worked so hard for up until that point. It was devastating to leave. Everything she did was for the future of the band, but it was time to go. In real life, that sudden cleaving left unexpressed grief which has lingered in my heart for over 40 years. That sadness spilled out in quiet tears as I lay in bed the night after the memorial. I tried, but couldn’t even discuss it with my husband without a quavering voice. My tears were not about Rick, but for my old, lost friends and unrealized dreams. Those guys in the band, so important to me once upon a time, still were.

I was also grieving about the effects of the time machine we’ve all been through. Each of us wizened and wrinkly, whitened or graying or bald or fat, a little stooped by whatever burdens we have borne, since the act of being alive invites burdens.

I felt especially badly for Rick’s widow. She was forced to move out of her home immediately after her beloved’s death, swapping the happiness they had finally found with each other for a mountain of debt from the gruesome expense of dying from cancer on top of the unsupported life of a musician. This culture isn’t set up for any musical career short of rockstar, or for prolonged illnesses.

We were asked to bring momentos of our associations with Rick. I donated copies of the postcards and posters I illustrated and designed for the band’s gigs. One friend, the manager of the band, brought a stack of photos. Most of them were taken after my tenure, but there was one of my young self clowning around with Rick and Bobby, the wonderfully talented keyboard player who couldn’t make it to the memorial. Was that really me in those high waisted jeans and bandana over my long hair? It looked like me, but I couldn’t quite remember the event, that bandana, that bracelet, or Rick’s fedora. Was that girl really some slut who stepped into my role afterwards? I was retroactively jealous.

“I don’t know what the date was, but it was a benefit in Shelton, Connecticut,” my friend the manager told me. I searched though the scans of the postcards this morning and was relieved to find the Save the Whales Benefit in Shelton on one of them, a concert during the heart of my time there. Phew! It was me! A postcard from the past to my present self – the slut I was jealous of.

The very first postcard I designed for the band featured a line drawing of a stork flying through stylized clouds with a big moon behind it — prescient, considering how it all ended. The evening I learned of Rick’s demise (on Facebook), I sat on the edge of the hot tub in our Florida back yard and watched the sunset. An odd sound, that of beating wings made me look over my shoulder towards a rising full moon. The wing sound belonged to a low flying stork directly overhead, heading into the sunset.